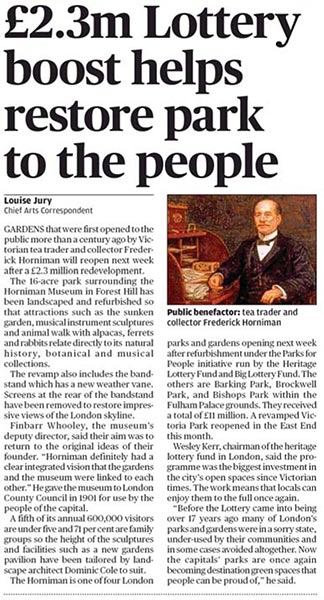 GARDENS that were first opened to the public more than a century ago by Victorian tea trader and collector Frederick Horniman will reopen next week after a £13 million redevelopment. The 16-acre park surrounding the Horniman Museum in Forest Hill has been landscaped and refurbished so that attractions such as the sunken garden, musical instrument sculptures and animal walk with alpacas, ferrets and rabbits relate directly to its natural history, botanical and musical collections.

The revamp also includes the bandstand which has a new weather vane. Screens at the rear of the bandstand have been removed to restore impressive views of the London skyline. Finbarr Whooley, the museum’s deputy director, said their aim was to return to the original ideas of their founder. “Horniman definitely had a clear integrated vision that the gardens and the museum were linked to each other.” He gave the museum to London County Council in 1901 for use by the people of the capital.

A fifth of its annual 600.000 visitors are under five and 71 per cent are family groups so the height of the sculptures and facilities such as a new gardens pavilion have been tailored by landscape architect Dominic Cole to suit.

The Horniman is one of four London parks and gardens opening next week after refurbishment under the Parks for People initiative run by the Heritage Lottery Fund and Big Lottery Fund, The others are Barking Park, Bracknell Park, and Bishops Park within the Fulham Palace grounds. They received a total of £11 million. A revamped Victoria Park reopened in the East End this month.

Wesley Kerr, chairman of the heritage lottery fund in London, said the programme was the biggest investment in the city’s open spaces since Victorian times. The work means that locals can enjoy them to the full once again.

“Before the Lottery came into being over 17 years ago many of London’s parks and gardens were in a sorry state, under-used by their communities and in some cases avoided altogether. Now the capitals’ parks are once again becoming destination green spaces that people can be proud of,” he said.